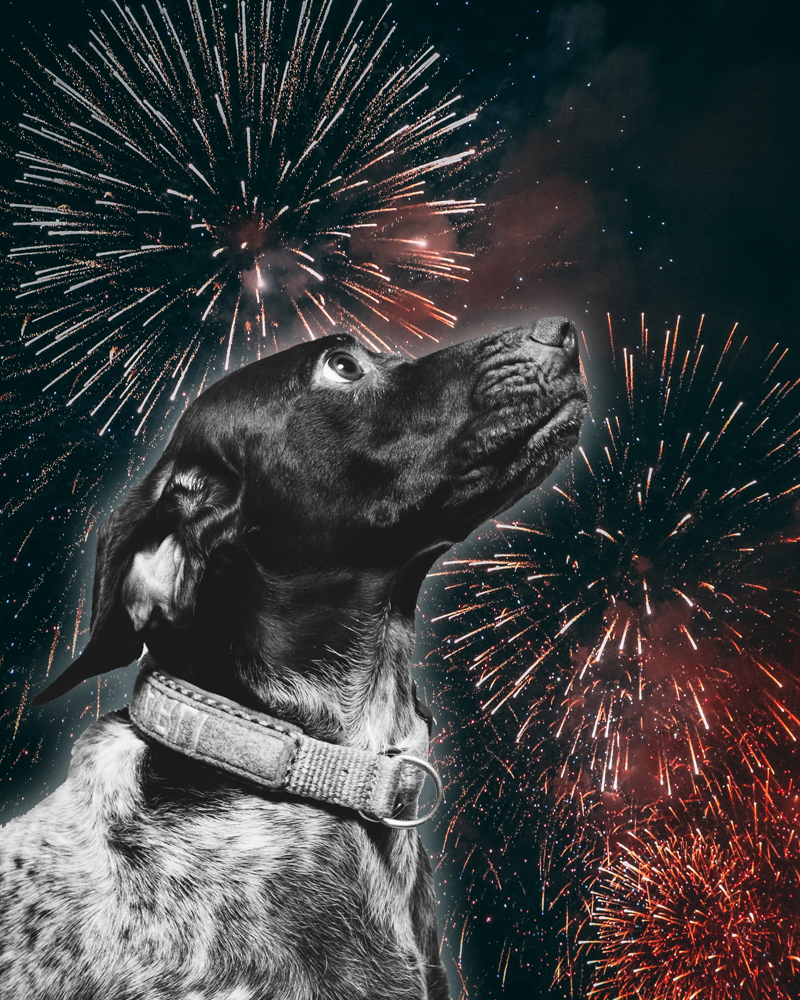 If you have a furry companion, you have probably seen first-hand the upsetting effects that fireworks can have on animals. If you are about to adopt your first dog, you will soon learn to dislike the displays you once enjoyed watching from your window.

These household explosives make unpredictable loud noises which are very frightening to animals. They traumatise animals and this trauma can, in extreme cases, result in death.

The fear that dogs experience around fireworks can lead them to exhibit anxious and unpredictable behaviour. Some dogs will want to run and hide, others will nervously pace around, panting heavily and shaking.

Fireworks are particularly frightening for very young and very elderly dogs, even more so perhaps if they are rescue dogs who have already suffered traumatic experiences in their lives and for whom the loud noises and bright lights fireworks make may be a trigger. Companion animals are not the only animals distressed by fireworks. Fireworks also cause panic and disorientation to wildlife which can cause adult animals to abandon their young and lose their way home. It is known that livestock and horses’ pregnancies can abort from the stress caused by fireworks.

As an animal rescue, we are wholly against fireworks being permitted outside of limited, organised displays. It really doesn’t seem fair to us that animals should have to put up with erratic, ad-hoc, firework displays throughout the months of October to January which their owners cannot predict and so cannot adequately prepare for.

A petition to ban the sale of fireworks to the general public and urging the government to limit their sale and use to licensed, organised displays only has gained hundreds of thousands of signatures. The government has not yet implemented any restrictions as a result but we are pleased to see some stores like Sainsbury’s voluntarily making the decision to stop selling fireworks out of concern for the stress that they can cause to animals, as well as elderly and vulnerable people.

It is impossible to predict every day on which fireworks might go off but you can proactively take note of the days of the year on which it is most likely that there will be displays, for example:

and make sure that you have a plan in place and everything to hand everything you need to help create a calm and relaxing atmosphere for your dog. We recommend, out of an abundance of caution, that you be prepared from the week before Halloween through to the New Year.

So, what can you do to reduce the stress and anxiety caused to your precious furry companion? Here are some of our top tips to try to make firework season as bearable as possible for your dog(s):

In the long-term, it would be wise for you to try to desensitise your dog(s) to loud noises over a long period of time. There are some playlists on Spotify, YouTube and the like which feature the sounds of fireworks, motorbikes and other commonly loud noises. You can play these around your dog now and again inside the house, on a low volume at first but steadily increasing it, to slowly acclimatise them to hearing these noises in a positive environment. If your dog starts to react visibly to the noises on a particular volume, avoid further increasing the volume and simply leave it stable for a few minutes to help them get used to it. However, if your dog’s reaction is visibly very negative, turn the noises off immediately and, once your dog has calmed down, start playing the noises again but on a lower volume. Keep playing these noises on and off over a period of a few months, on different volume levels, until your dog no longer reacts to the noises they once found scary.