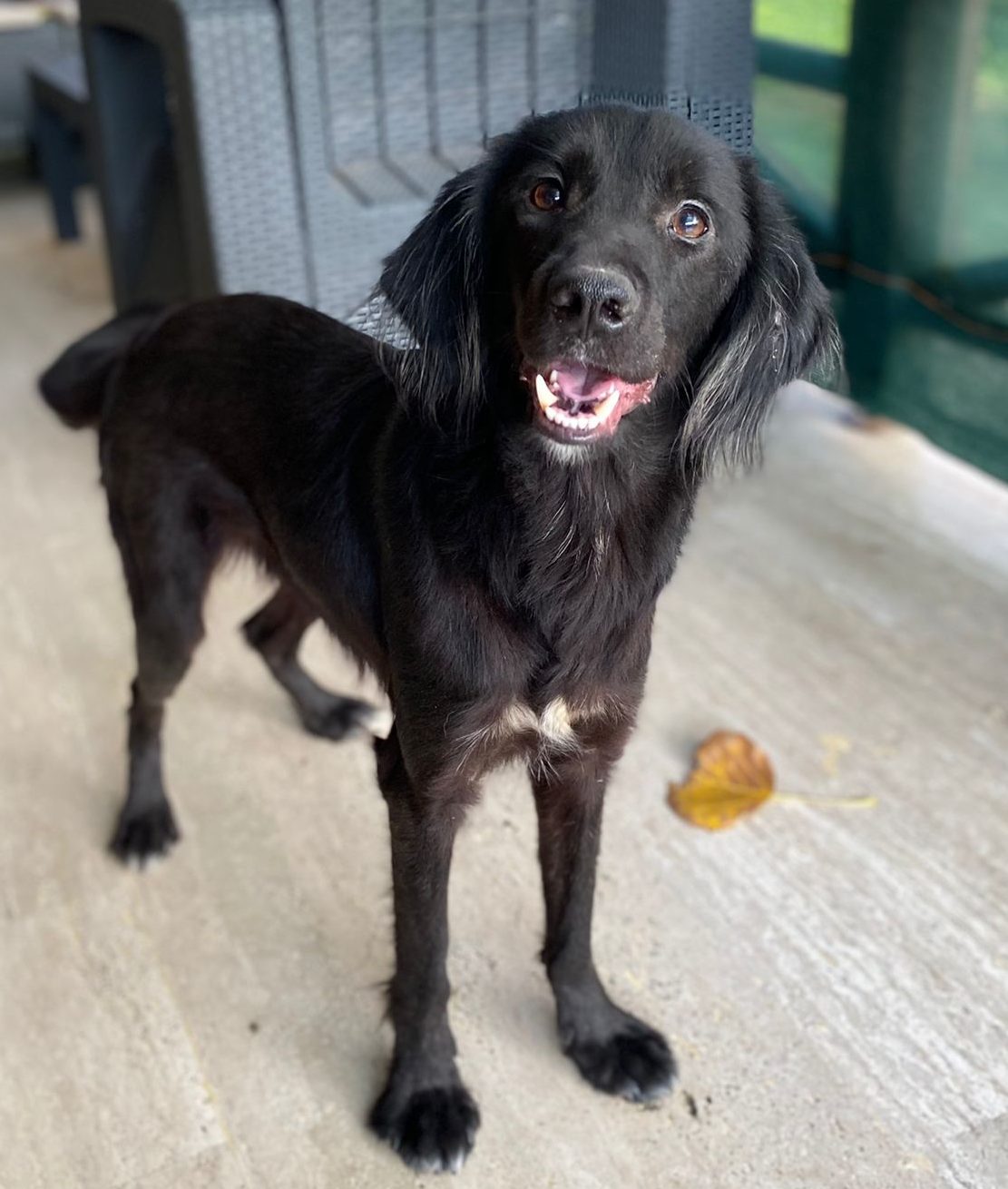 Sex: Male
Size: Medium
Age: 1.5-3 years old
Breed: Mixed breed
Has he been neutered? Yes
Energy needs? Medium-High
Can he live with children? He could live with sensible children aged 12 years or older.
Can he live with dogs? We would prefer him to live with another dog but he could live as an only dog in the right home.
Can he live with cats? He has not been tested with cats and appears to have a prey drive towards them.
Where will he travel from? He is in foster care in UK (Essex).

Neo was rescued from a government shelter where he was suffering with distemper. Against poor odds, he managed to survive and was then prepared to travel to the UK to find his forever home.

Neo is brilliant with people. He really enjoys human company and affection and quickly comes out of his shell around new people.

In his foster home, he has done well meeting people both inside the house and outside of the home on walks.

If he wants time to himself, he will curl up in his bed for a nap.

He has had the opportunity to meet children and has done well with them. Because of this and his generally placid nature, we think he would live well with children. However, because he can be playful and bouncy at times, we would prefer him to live in a home with dog-savvy older children and so would consider applications from families with children aged 12 and over.

Neo really enjoys the company of other dogs. He is very playful and loves to play chase and play fight with friends.

He can be a little bit wary of big dogs on walks and will look to his family for reassurance if he feels nervous around them.

We believe he will do best in a home with an existing dog (or two!) of similar or smaller size to help give him confidence and to help him burn off some of his playful energy.  He has done very well in his foster home with a slightly older foster sister who plays with him but also helps set boundaries for him.

If he was to live as an only dog, he would need plenty of mental stimulation and exercise to be provided by his adopters.

Neo has not shown any evident guarding behaviour in his foster home with food or toys.

Neo is easy to manage on walks. He is happy to have his harness put on and walks very well on the lead and tends to stick close to her foster family and their existing dog.

He enjoys greeting other dogs and thoroughly enjoys sniffing on walks – he is a clever boy and walks where he is permitted to explore with his nose a lot is a great form of mental stimulation for him.

After he has had a walk, he usually settles nicely.

He has shown signs of being interested in birds and other animals in the distance so we think he might have a prey drive which his adopters should be aware of.

During his time in foster, he has been on walks in both busy and quiet areas and has not shown any nervousness around places with a little bit more commotion.

His foster family have been working hard on toilet training with him. He has been doing well but his adopters need to be prepared to keep working on this with him, positively reinforcing toiletting outside. A good indicator that he needs the toilet is if he does the zoomies – this seems to be his pre-toilet ritual!

As long as he has had a good amount of exercise, he is generally very well behaved in the house.

He hasn’t displayed a tendency to be destructive in the home but he does have a cheeky side to him and, in foster, has taken a liking to finding and chewing on toilet paper. His adopter should be prepared to protect their loo roll and to help him learn what he can/cannot play with and chew on.

Neo loves his food and so can get quite excited around feeding time. He shows his excitement by jumping up. His foster family have been working on teaching him boundaries at feeding time and he is doing well learning to be more calm. His adopters should be prepared to keep encouraging him to stay calm and not jump up.

Neo is good at settling himself in the evening and sleeps well through the night. In his foster home he has tended to sleep through until morning. His adopters will need to be prepared to help him get used to their routine.

He does have plenty of energy to burn and needs a good walk each day as well as mental stimulation by way of training and enrichment games and toys.

In his foster home he has tended to be lazy in the morning and then have an hour of fun playtime in the afternoon.

He knows his name well and is clever – he picks things up quickly. He also loves food and treats and so should be receptive to food as a reward.

His foster family have been working on some basic obedience training with him and he has done well.

Neo will do best in a home where his adopters are home most of the time (i.e. not working in an office all week) and able to give him adequate exercise and mental stimulation. He would love a good-sized garden but could also be happy with a smaller outdoor space provided he gets enough exercise outside of the home and is given enrichment.

We think will be happiest with at least one other dog in the house to help show him the ropes in his new home and to play with but he could also be a lovely companion for an adopter without an existing dog who will make him their world and is happy to play with him in place of another dog.

With his energy levels and intelligence in mind, we would love Neo to go to an active home with adopters who are prepared to train him (not just for obedience but also for stimulation and development).

Whilst we have tried to provide a very thorough profile for Neo with the help of his foster home, we make no guarantees about his behaviour. a dog’s behaviour can change in a new environment, with a new routine and new people and even over time.

We ask that all of our adopters connect with a suitably experienced behaviourist prior to the arrival of their dog so that they have someone they can turn to for professional support if needed. It is invaluable to have this set up from the get go.

The most important thing we are looking for in applications for any of our dogs is a clear commitment to them, understanding that their behaviour can change and the promise to support them through it all.